Efficiency in real-time: modernizing a department

Utilization of the most up-to-date technology in the healthcare industry is pivotal — from intake and diagnostics, to surgery and administration. In 2009, Albert Einstein Health Network began to implement voice recognition (VR) software into their pathology department in order to capture findings in real-time. Before the advent of VR systems in this field, transcriptions would capture information dictated by pathologists during tissue analysis, resulting in his or her having to eventually reread and revise reports to guarantee clinical accuracy. Due to heavy workloads and the availability of transcriptionists, pathologists would sometimes be forced to resort to typing their own reports. This practice was an inefficient use of valuable talent and resulted in egregious turn-around times—sometimes up to six hours.

Greencastle Consulting was hired to ensure that the rollout of the new VR system was a success. Greencastle began by assisting the project sponsor with development and completion of the Project Charter. The benchmarks identified were to have at least 95% of all reports generated through the use of the new system, to save money by eliminating unnecessary positions, to make sure pathologists were willing to adopt the system and use it satisfactorily, and to implement a model for monitoring and controlling the system’s growth after launch.

Planning was crucial to the project’s scope and efficacy. A six-month schedule was outlined, beginning with a set of measurable deliverables to be worked into the metric design. Greencastle coordinated with AEHN team members to assess and compare product vendors and to select a provider. The schedule included project meetings across various departments who held a stake in pathology report improvement. Emerging issues were paired with resolution-oriented actions to keep the timeline on track and to improve the overall outcome of VR implementation.

Increased turnaround time was labelled a top priority during the planning phase, as the number one benefit of computerized speech recognition. As the project progressed, it was important to keep project sponsors and committee members informed of status updates and pending decisions, so that changes in the scope of implementation were able to be simultaneously discussed and accounted for. Initial and subsequent workflows were designed and trialed through beta testing to assure efficiency and ease of use for clinicians and records staff.

Before rollout, Greencastle conducted a testing phase to verify workflow accuracy and to determine the program’s integration timeline. Finally, the team worked with the product provider to set up a customized IT support system for post-launch, and developed an operations transition plan. After the ultimate revisions, AEHN released the new voice recognition software to all pathology labs, network-wide. The Health Network was able to eliminate two transcriptionist positions while increasing report turnaround time and improving accuracy. 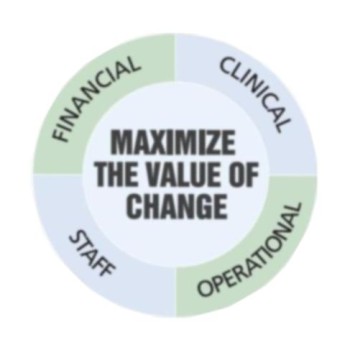