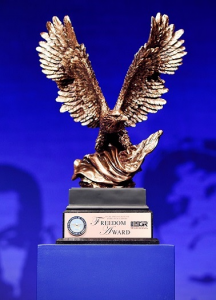 ESGR received nominations from 2,350 different employers in three categories: small employer, large employer and public sector. From there, ESGR committees in all 50 states, Guam-Commonwealth of the Northern Mariana Islands, Puerto Rico, the U.S. Virgin Islands and the District of Columbia review nominations and submit recommendations that produce a list of 30 Finalists, which was announced in March. A national selection board comprised of senior Department of Defense officials, business leaders and prior awardees then selects up to 15 employers to receive the Secretary’s prestigious award.

Greencastle is one of two companies from Pennsylvania that received the award in 2018 – this is the first time Pennsylvania produced two winners in the same year. Slippery Rock University of Pennsylvania won in the public sector category.

Major Troy Beane says “I nominated Greencastle for the Freedom Award because of the support they provide me and my family during my reserve commitments. I know that when I get back from deployment, I will be taken care of and be able to continue my career without any issues. That is very comforting.”

Greencastle is a previous recipient of the Pro Patria Award, Seven Seals Award, Above and Beyond Award, Extraordinary Employer Support Award and other Pennsylvania specific ESGR awards.

Congratulations to all the winners. This award should not be taken lightly, and Greencastle is humbled by the recognition. We look forward to the ceremony in August and will continue to be a leader in supporting our nation’s volunteers.

About Greencastle Associates Consulting LLC
Greencastle is recognized as the ‘go-to’ firm for the implementation of critical initiatives for energy, telecommunications, and healthcare organizations. We maximize change initiatives for our clients by leveraging our military and professional leadership and the values of our company. Founded by U.S. Army Rangers in 1997, Greencastle specializes in bringing a sense of purpose to the task of furthering the missions of our clients. https://greencastleconsulting.com/

About ESGR
Employer Support of the Guard and Reserve (ESGR) is a Department of Defense agency established in 1972 that seeks to promote a culture in which all American employers support and value the military service of their employees. ESGR recognizes outstanding support, increases awareness of the law, and resolves conflicts through mediation. More information is available at www.esgr.mil.